Many of you are no doubt aware of the Laser Cycles that were released in 1995 named Road Rocket and Road Pig. These two figures were among the new molds released toward the end of the Generation 2 toy line. The Laser Cycles feature a gimmick where small red LEDs illuminate clear plastic weaponry. 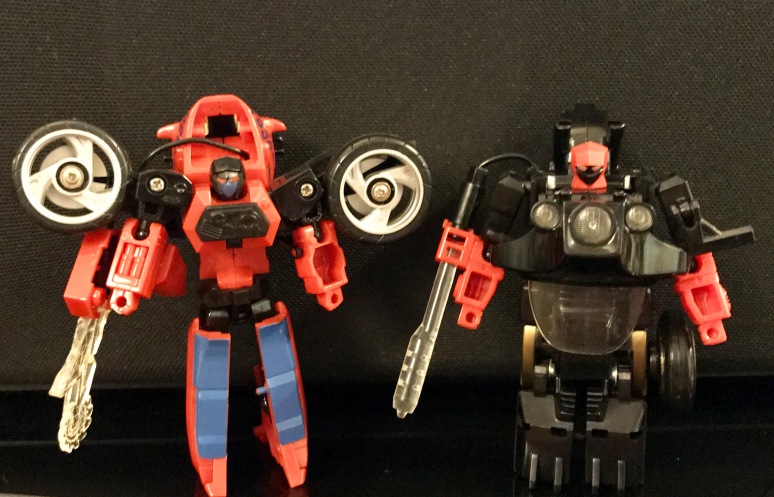 However, you may not know that Takara released the Laser Cycle molds again in 2000 within their Microman line.  The Laser Cycles were each released in Microman in two different decoes. These new versions were sold without electronics and with retooled handlebars for the Microman figures to better grab hold to.

This article will focus on the more common version of the Microman Road Pig mold. Given the moniker Road Bison, the main difference between this figure and his Transformers cousin Road Pig is that Bison substitutes gray plastic where Pig’s plastic is black.

Road Bison features a red head sculpt, red forearms and hands, and upper arms consisting of black plastic. As mentioned, his electronics have been completely removed so there are no wires connected to his clear plastic weapon. This means Road Bison’s weapon can be permanently detached whereas Road Pig’s weapon is permanently connected to him.

G2 Road Pig’s bio states that he has “no known friends among the Decepticons.” I like to think that Road Bison is his brother.

The second recolor of this mold in Microman was released as a ToysRUs exclusive in a box set along with a recolor of the Road Rocket mold. That version was named Tornado Bison and I will feature him and his exclusive box-mate in an upcoming post.

The world of Transformers continues to grow. I particularly enjoy when Takara includes former Transformers molds in their other lines. It especially seems fitting with Microman since the original Transformers line was an amalgamation of Diaclone and Microchange figures. Additions like Road Bison are fun for enthusiasts like myself who collect foreign recolors. Microman gives up some real oddities and I highly recommend Road Bison to anyone interested in adding him to their collection.

I’ve always been a fan of the Laser Cycle molds. They are pure G2 goodness. Road Pig appeared briefly in the IDW comic book continuity when he made a cameo in the first issue of the Drift miniseries. Here is hoping that someone eventually inserts Road Bison into one of the issues as a cool Easter egg.